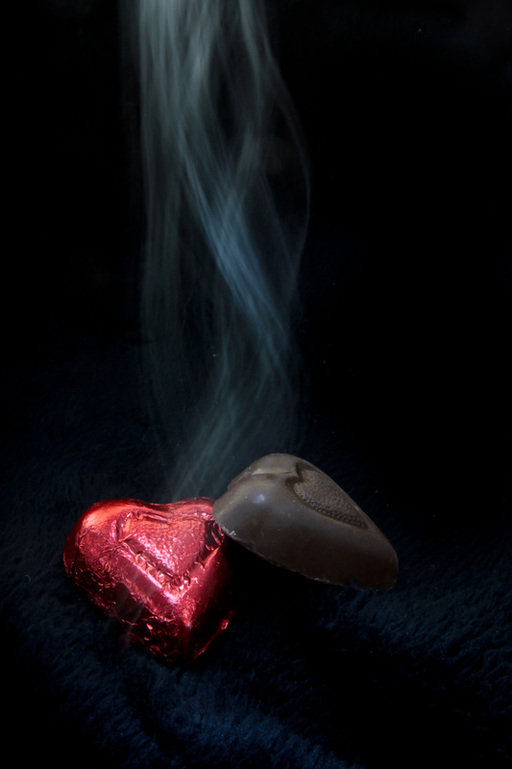 Valentines Day was last week, so this was a little late for that, (but is why I had the chocolate hearts available for the photo).  But then Kathy and I celebrated our 7th anniversary this week (the 19th), so this is a good image honoring that.

I saw a technique for simulating smoke and wanted to give it a try.  You can view the how-to video on YouTube here - on PhotoExtremist.

To give away how it's done, I put the camera on a tripod so it was rock steady for the 6-second expsure.  The camera was set for ISO 100 to minimize noise.  I used f/29 so I could get the long exposure.  If you had neutral filters, that would be another way of enabling a long exposure.

I got a penlight flashlight and tied several strands of dental floss to the tip.  There was no light on the hearts at all and they were on a black background.  I tripped the shutter and with the light shining down the floss, moved the floss over the hearts, painting the hearts with light and keeping the floss in motion so it blurred.

That's it. A little tuning with Adobe Lightroom and touch-up with Corel Paintshop Pro, and here you go.

You could shoot dozens of shots with this technique and because of the movement of the floss, every one would be slightly different.  Other subjects would be fun too.  I thought perhaps chili peppers for another time.

I call this "Smokin' Hot Hearts" and for our 7th Anniversary, dedicate it to my wife Kathy.  Love ya hon!