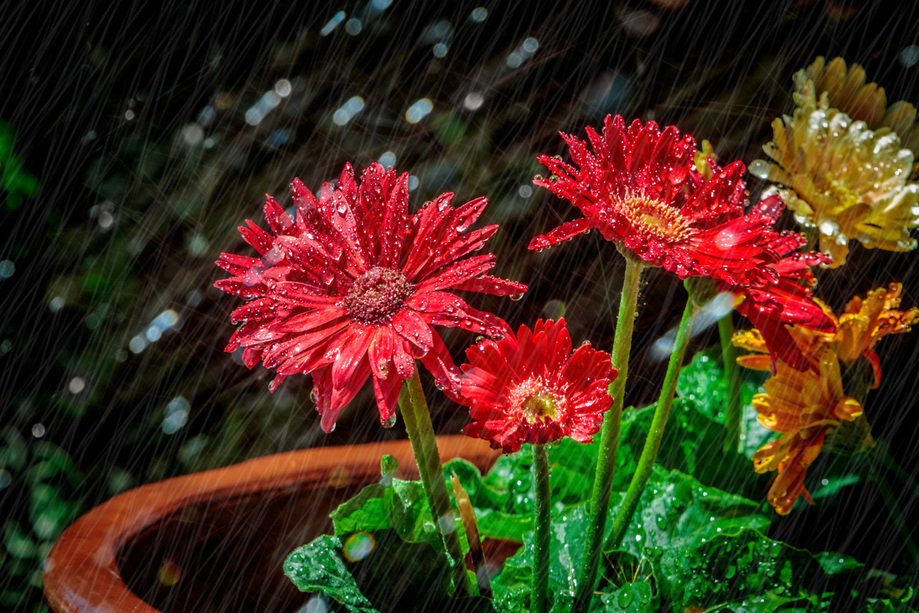 Flowers in the Rain

Part of the reason I wanted to do a "Project 52" was to not only get in the habit of making more creative photos on a regular basis, but to move into areas of photography and techniques I haven't tried.  The internet, and particularly YouTube, is a great source of inspirational and instructional photo ideas.  When I saw this clip showing how to shoot flowers (or any object), so that the photo looked like it had been taken in the rain, I wanted to try it.

First, it seemed a good choice in that this past week we had some showers, and one day about a 20-minute "cats-and-dogs" downpour that filled the gutters and made for some huge puddles.  Saturday when I shot this of some Gerbera daisies growing in a terra cotta pot, it was beautifully sunny and the "rain" was from a sprinkler placed out of frame.  The suggestion from the clip that 1/60th of a second was the best shutter speed to capture the drops turned out to be right on.  I took this in the middle of the day however and I'm thinking stronger backlighting would have brought out the drops better.

As it was, I had to "cheat" a little, using an old "Particle Creation" plugin filter from Ulead.  (As a Photoshop-compatible .8bf plugin, (I used it in Corel Paintshop Pro X5), it can create snow, smoke, fire, fog, sparkles, lens flares, bubbles, and yes... rain. It is a really old filter, and Ulead doesn't exist anymore, but I've placed it here and it's available for download below.  It should work in Photoshop, Elements, Paintshop Pro, or any other program that can use   The blurred drops from the sprinkler just weren't giving me as much effect as I was looking for so the Ulead partcle Plugin was just the ticket.

I'd like to try this again with stronger backlight to see if I could get the look I was seeking strickly in-camera, but I was pretty pleased with the effect in this shot.  Come this next weekend, (when temps are forecast to hit the 100's for the first time this summer), perhaps it will be I who's cooling off under the sprinkler!