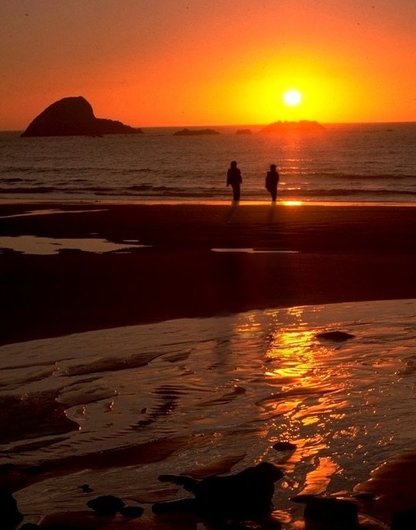 Trindad, California near where I went to college at Humboldt State University.
Working Backwards

Sometimes do you just feel like you're working backwards?  Well, the subjects of this weeks post literally -are- a form of working backwards.  First, I'd read that one of our photo club members had been sending in his old 35mm slides for scanning to a digital format.  Of course, my photo roots go back to the film days too and particularly during my college days, (Yikes!  Was that really almost 40 years ago??!!!), I shot quite a few slides.  (Sing it with me Paul Simon... Kodachrome...)  I shot some Extachrome too, though not as much.  So I prowled through the hall closet and found my collection of old 35mm slides and rolled back the calendar over three decades.

I'm not sure if I was shocked or dismayed, but the general quality of the images was junk compared to even the images from my first digital camera, (a Nikon Coolpix 950.)  In college I had an East German made Hanimex Practica Nova 1B and the stock 50mm lens.  No zoom, no autofocus, rather primitive metering that wasn't even through-the-lens.  Quite a few years later I got a Pentax ME Super, but by then was shooting more prints than slides.  About 10 years ago I had some of what I thought were my "better" slides scanned to CD (in what was called Kodak Photo CD format).  My software today can still read it and so I was able to pull in a few shots, tweak them with my modern tools, and present them here.  See the slideshow below... (Then scroll down to read the second part of this week's posting)

I really enjoy close-up / macro photography.  During Week 6 of my Project 52 I played with some extention tubes I borrowed from a friend and had some good fun with those.  Since then, I've been reading more on macro photography and learned of an usual technique where if you take the lens off your camera and then mount a lens backward on the camera, (so that the end that typically is toward the subject is now toward the body of the camera), it will allow for ultra-close focusing.  The article said that the old film lenses one might have gathering dust work especially well for this.  Well heck... I have some of those, (in particular a Pentax 50mm from the old ME Super, a Vivitar 28-105 zoom I also used on that camera, and an old Nikkor 43-86mm zoom from and old Nikkormat 35mm camera I have as a collector's piece.) The proper way to do this is to get a reversing ring which screws into the front of the lens where a filter would normally go and has the proper camera mount at the other end allowing you to mount the lens backwards on the camera.  Not having the rings, I simply held the lens to the body for these shots and peered through the viewfinder.

I'll be $%^#!!! It works!  No, you have no auto focus, no aperture control, and can only control exposure in full manual mode with shutter speed and ISO, but hey.... I was excited to see how well it -did- work.  So I took a few shots, (see below), and promptly went on line to buy the reversing rings (spending a whopping $20 or so on Amazon ).  No, I don't expect the results of a $600 macro lens, but for the price?  Looks like a ton-o-fun to me!  Pull a dollar bill out of your pocket and compare and you'll see just how close this set-up can focus!  When I get the rings I'll have to post some more pics.

Photos in the fiirst segment were all taken with a Hanimex Practica Nova 1B
Lens was the standard 50mm German-made Meyer - Optik Gorlitz Oreston 1.8/50 lens
Images were shot on Kodachrome 64 slide film.  Slides were scanned to Kodak PhotoCD format

Images in the second section were all show with a Canon 50D
Lenses were a Pentax 50mm, Nikkor 43-86mm zoom, and Vivitar 28-105 zoom (all held -backward- in front of the camera body!)
Go to Week 19
Powered by