Today is New Years Day, 2013 and I've decided to start what some call a "Project 52," that is to say with 52 weeks in the year my plan is to post a new photo each week.  Some do a "Project 365," and while that is admirable, I'm not sure I could sustain that for a whole year and my intent is to post quality shots, not simply quantity.

I'm sure that some weeks I will have more than enough photos to choose from and find it hard to narrow my choice to just one, while other weeks I will have to make a concious effort to be sure I get a shot.  Overall though, I think this will be a fun exercise to see what kinds of things I encounter over the course of a year, how the images change through the seasons, and what I learn from the process.

I will post my first image at the end of this week.  After that, I will try to make the postings on the weeekends, so I will have a week to decide what my posting will be, but that could vary too.  Let the games begin! 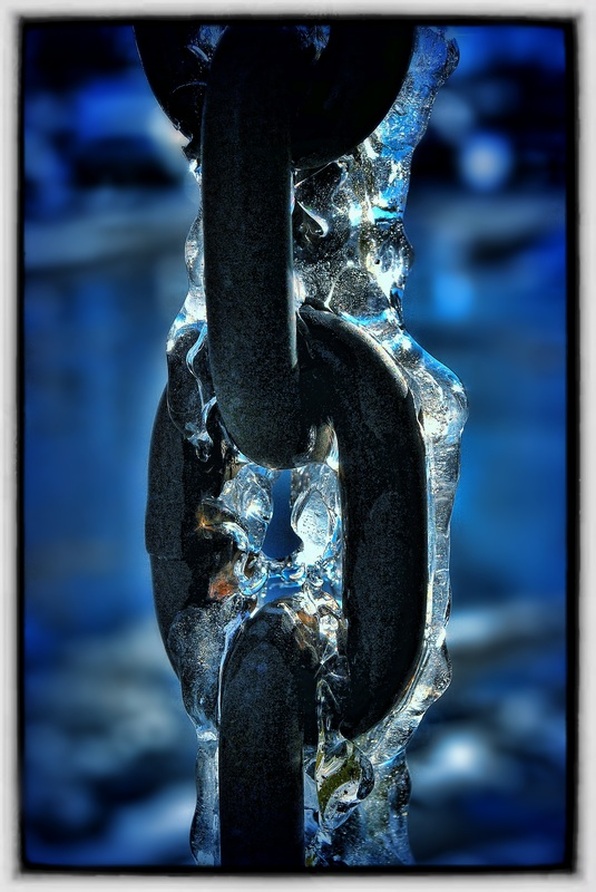 I work just part-time since I retired from my 28-year job as Public Information Officer for the Idaho State Police a few years ago.  That job occasionally required outdoor work and sometimes photography, but this job, doing photos of the cars for Kendall Ford of Meridian for their website, is
mostly outdoor work.  It's work with a camera in my hand, so that part I like.  I also like being outdoors... well...usually.

This week it's just been way cold.  Frigid!  Highs haven't topped freezing and when the wind blows it's biting.  We had a skiff of snow around New Years but it's still here.  I was walking on the car lot this week and spotted this chain, used instead of a downspout on the bulding.  There had been just enough melting that at some point water must've flowed down the chain, but with the extreme
cold, ice now encrusted it.

I liked the way the backlighting passed through the translucent ice, but the steel chain was mostly silhouetted.  I shot this with my work camera, a Nikon D3000 with the kit 18-55 lens.  I then brought it into SnapSeed, an image editor I can use on my Google Nexus 7 tablet.  There I played with the contrast, sharpness, and added more blue to the image to emphasize the cold.  I took it into Topaz Adjust to play a bit more with the sharpness.

The image speaks to me of the cold grip of winter and I think it's a good start to this Project 52 as I like it both photographically and also as a record
of this very cold January week.

Go to Week 2
Powered by