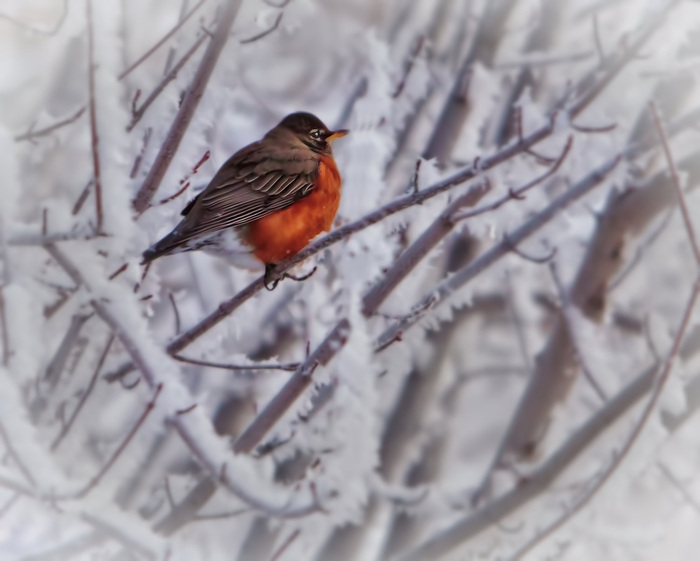 The story of the week had to be the bitter cold weather.  I've lived in Boise/Meridian for 37 years and we've had weather this cold before, but thankfully not often.  Highs most days have been in the teens with the overnight lows in the single digits and a few times dipping below zero.  Add fog to the cold and in the morning you can get what is called "rime ice" or "hoar frost."  The moisture in the air freezes on contact with any cold surface and things are coated with ice crystals.  Early in the morning it can look like a fairyland with every twig and branch coated with the delicate crystals.

Such was the case the morning of 1/17/13.  Temperatures about 6-degrees, ice crystals thick on the everything, and then something you didn't expect... the trees were full of dozens of robins.  Huh??  I thought robins were a sign of spring?  What were they doing here during this frigid day in January?  What was striking was their bright reddish plummage against the subdued whites and browns of the trees.  Puffed up as big as they could be, trying to insulate themselves from the cold, they looked like so many Christmas ornaments in my maple tree.

So I grabbed my long lens (Canon 70-200 f/2.8) and shot through the patio glass.  (I wasn't going out there if I could get the shot from the warmth of the dining room!)  I later added the white vignette to capture the foggy cold feeling of the day.  I had to think this robin must've wished he'd stay south a bit longer.  I know this past week I also wished I was somewhere warmer.