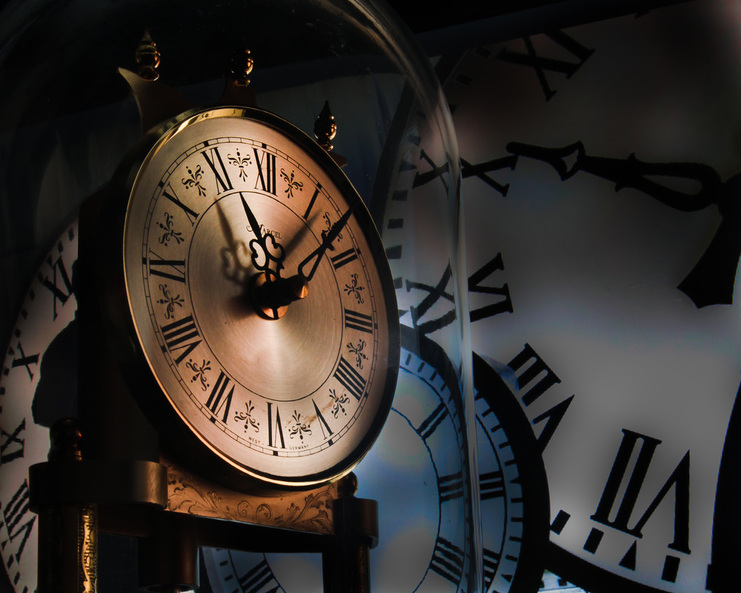 Tempus Fugit.  The inscription appears on the grandfather clock in our living room.  It is Latin for "Time Flees." (We typically hear the expression in English as "time flies," and indeed it does.).  It is already Week 10 of my Project 52.  Tonight we "spring ahead," advancing the clock an hour for daylight savings time.  It was that event that got me thinking about a photo of a clock for this week's image.

I've also been watching a new TV show called "Zero Hour" and the plot very much involves clocks and clock imagery.  It also got me thinking about clock photos. (Bummer... as I posted this I see ABC has cancelled the show after just three episodes.)

The subject is what I believe is called an "Anniversary Clock" of Kathy's.  Though this one uses a modern quartz movement, it mimics the design of those that have been around for hundreds of years.  Keeping with the theme, I found some time-oriented backgrounds I could display on my computer screen.  So, with the clock in the foreground and the computer images in the background, I made the shot.

To get more dramatic lighting I opted for using a long exposure.  The computer screen provided most of the light, but then I did a bit more "light painting" with a flashlight during the long exposure to highlight areas I wanted a bit brighter.  I shot in Raw and brought the image into Adobe Lightroom for more tuning, finally doing some finishing touches with Corel Paintshop Pro X4.  Full technical details are below.

Below are some other shots from this photo session. Click them to enlarge and see them better. Then let me know which you like best.
Email Me 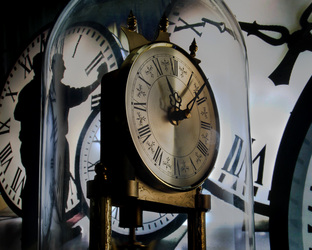 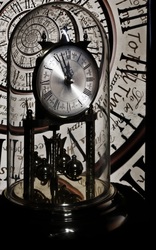 Technical specs:
Camera - Canon EOS 50D
Lens - Tamron 17-50 XR Di II f/2.8
Exposure -  ISO 100, 10 seconds @  f/18 (this is for the first shot.  Other shots varied with the last shot 2.5 seconds at F/32)
All shots were illuminated with the computer screen and some "light painting" with an LED Flashlight
Matrix metering and Auto white balance
Shot as  - RAW
Edited with - Adobe Lightroom 3 and Corel Paintshop Pro X4
Go to Week 11
Powered by